[World of Warcraft] Mists of Pandaria has its moments for sure. (A bit awesome) 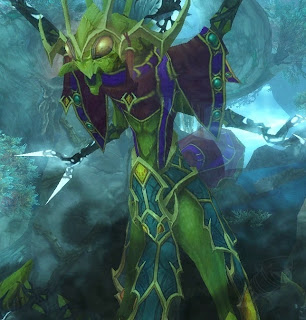 There are countless times in World of Warcraft: Mists of Pandaria that awesome cut-scenes and in-game events will happen.

Does that mean the game has turned awesome all of a sudden? Nope, under the hood it's the same old WoW, but it's accessible for casual to hardcore and social to solo alike.

Anyway, here's a video of a couple moments I think are in fact awesome.

This first video plays when you complete the Valley of the Four Winds & Krasarang Wilds questlines. The Mantid threat up until now has been a minor one thanks to the wall, but that all changes here. You are re-introduced to all the characters you have met along the way and you make a final stand in the Valley to protect it from being overrun by the Mantid Swarm.

This second video is after you have befriended a group of Mantid known as The Klaxxi; they are the Mantid's greatest elders whom have recognized the insanity of the empress and wish to save their civilization by overthrowing her. Their greatest warriors 'The Paragons' have been sealed away in amber and scattered all over the zone, now your character takes on the role of The Wakener, who has to go find and wake up these Paragons. After waking up enough of them, you are treated to a scene in which the Empress herself shows up, and wielding the Sha powers she has gained, puts the hurt on the Klaxxi.

If and when I find more awesome scenes in Mists of Pandaria I'll go ahead and add onto this post.
By Zaric Zhakaron at 4/22/2013