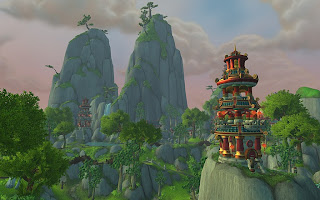 The Jade Forest (THE FIRST 85-86 ZONE)'s quest story is worth playing Mists of Pandaria. If you don't enjoy the next zone, cancel your subscription and you played the best out of the game already.

Let's assume that you are playing alone, and are not a hardcore player. Under that assumption you should do the following:

You are free to join a worthwhile guild with your Raid Finder Gear, convince your friends to join you and PvP with them, and more... but the bulk of the game is over and the rest JUST REPEATS ITSELF until the next patch. 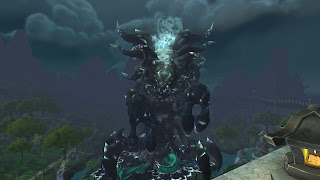 Okay so you've been away from the game for a while, that's fine. Perhaps all of your friends who used to play it quit, or moved onto other things. As a solo player, or duoing with a friend or spouse  World of Warcraft's Mists of Pandaria has an extremely entertaining "quest story" that can be experienced in solo or co-op (party) play that will require less than a month to finish entirely. It's VERY fun. 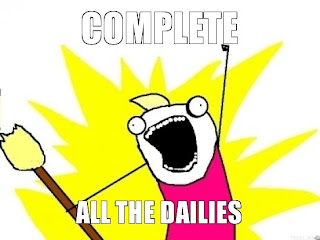 After you finish with the main quest, if you decide to continue the path of questing it devolves into World of Daily Quests, and I DO NOT really recommend playing that game, even though it's the chief way of obtaining reputation to enhance your tradeskills and buy valor gear, unless you turly enjoy spending hours on end doing mutiple daily quests for each faction on each character... the effort vs enjoyment just isn't there. It's a job, we already have jobs, kids already have school. We play WoW to go on adventures, not
work.

Now lucky for us the valor gear is not mandatory as you can skip Valor gear in favor of Raid Finder gear.

Gone are the days of Regular max level and then Heroic Dungeons, now heroic is just another word for level 90. If you play as a tank you will get instant dungeon queues, healers have a short wait, and DPS still have a long one. 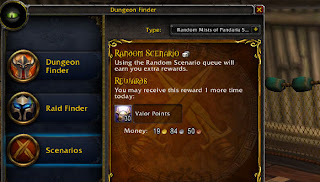 The DPS 'wait' can be circumvented by the use of scenarios, which are instant-enter 3 man dungeons with objectives to complete, it can be compared to Assault Mode in UT2004 where you are on a mission instead of a dungeon crawl. You will often interact with notable Warcraft characters. Because it's expected that all 3 members of a scenario are DPSing, the opponents are easy or you are given mechanics with which to win. Many of the "easy" monsters use a special attack that is clearly marked on the ground, or interuptable. Failure to adapt to the mechanics will result in death, but even in horrible gear you can "ROFLSTOMP" (defeat) a scenario with little to no effort f you just know how that one is played.

The queueing system pauses the longer queue when you enter the shorter one. As soon as you exit the scenario, the dungeon queue will kick back in and 9 times out of 10 (from current experience) you will instantly or shortly thereafter be allowed to enter the dungeon. This means that DPS players are no longer required to do nothing while waiting for a long queue, they have something to do that is rewarding.

This method of dual-queing via scenarios also works with the Raid Finder system and should be used and used often for Healers or DPS. Tanks should still have little trouble finding dungeons and raids.

The PvP system has changed little, and right now resilience gear will almost always allow you to overcome a raid geared player. They also added what is called PvP Power to pvp gear, this will cause you do more damage to players as well. In a upcoming patch they will do away with resilience entirely and give players a flat damage reduction against other players that you can reduce by gaining PvP gear.

In any case, you should have no problems doing DPS in a Raid Finder dungeon with PvP gear. Raid Finder raids are far easier than standard mode or heroic mode ones and the gear requirement is much more relaxed. Keep in mind however that this pertains mainly to the lowest tier raids, and as you progress to harder raids it's expected you'll have better gear.

This is where the game starts to fall apart in terms of enjoyment vs effort and where the casual player should quit the game outright. Those who enjoy the gear treadmill can continue up the raid tree but they would be better off finding and joining a raiding guild at this point. Hardcore players are rewarded for coming together with other players.

If you've experienced all the Main Story Quests, Scenarios  Heroic Dungeons, Battlegrounds, and Raid Finder content and are still not active in a guild (active meaning part of the social click), then it's time to quit the game. Nothing but repetition awaits you.

The lasting power in World of Warcraft comes from the social aspect, if you get together with other players on voice chat (Mumble, Ventrillo, Teamspeak ranked in order of quality) you'll always have a reason to log on -- online friends. The social experience is what makes the endgame worthwhile, without it, there are much, much better games out there to play.

Remember though little article was aimed at solo, casual players. I tend to play WoW with my wife and friends and would recommend anyone looking to get into World of Warcraft do the same; still, not everyone has the luxury.