Reaper of Souls fixed Diablo 3; Hated the game, now I love it. 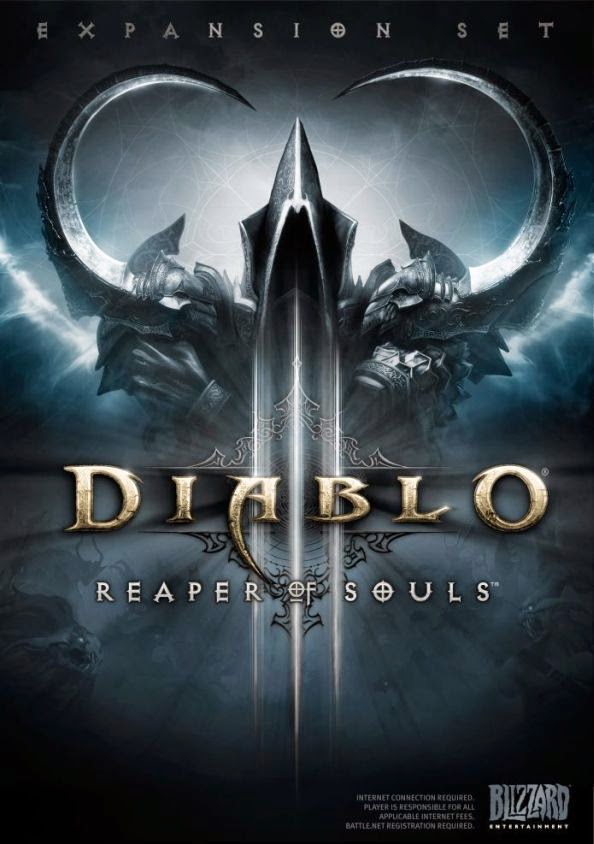 I've been a long time Diablo 2 fan but I was rather disappointed at Diablo 3's failings... well I LOVE Reaper of Souls! I'll explain...

Most of D3's failings revolve around the auction house. Well, they took that out, and thank you lord now you actually look for, craft, and trade items! That was the core purpose of Diabo 2, and it's back.

The game no longer ties monster levels to difficulty level. You are able to access Normal, Hard, and Expert right out of the gate. These difficulties can be accessed at any level and come with enhanced XP/Loot for trying harder

When you beat the campaign Master difficulty unlocks and that's pretty much the standard for a decently geared and skilled player who hasn't maxed out yet. 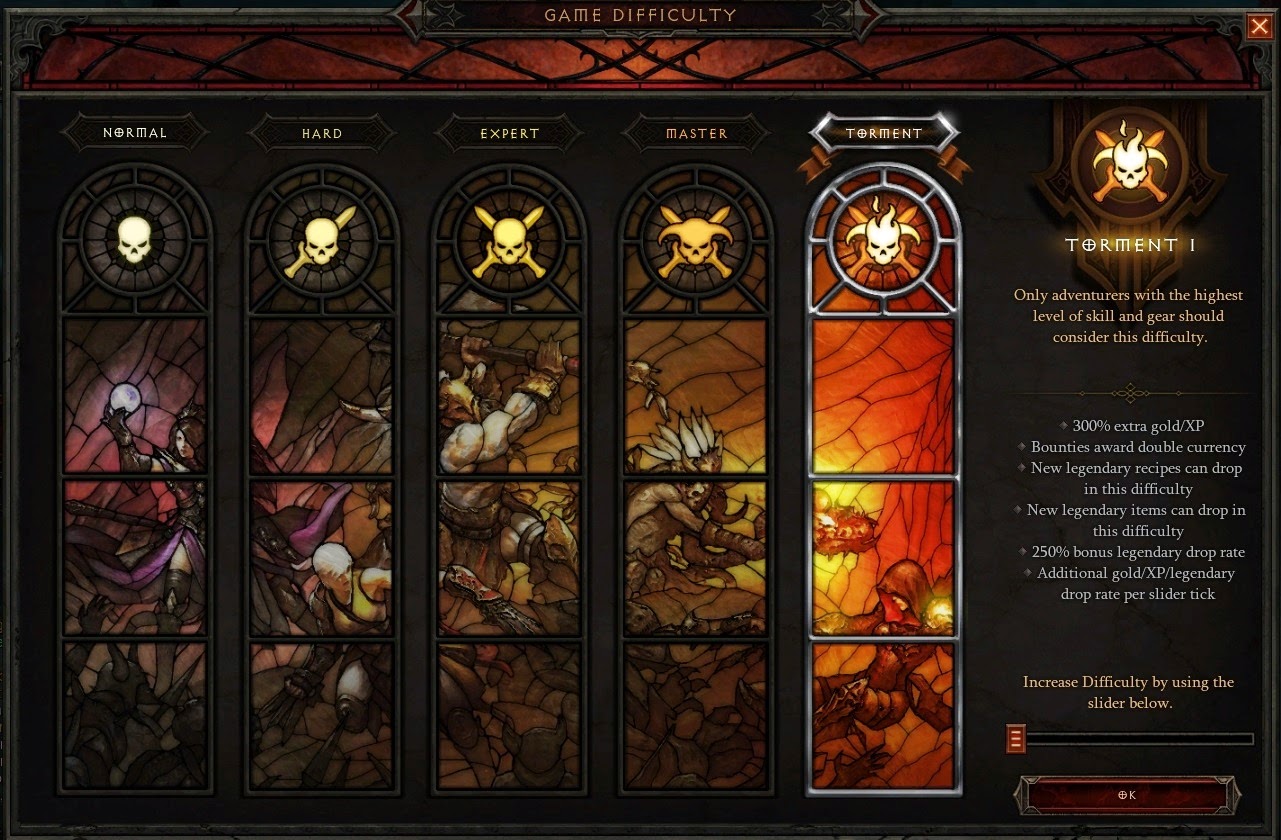 After you reach maximum level, Torment unlocks and it's pretty well expected that a skilled, geared, and gemed player with no legendary items can play on Torment. Torment is special because not only does it give enhanced EXP and Loot, but special gems and other perks as well. Torment has a slider bar, Torment 1 to 6, and the perks stack with each tick of the bar. So you pick your challenge and jump right in, knowing the harder you make it, the better the reward.

The EXP Bonus is kept relevant 100% of the time by the Paragon System, with which you will continue to gain levels after reaching the maximum level. These Paragon levels allow you to assign points to your extra abilities such as "Cool-down Reduction", "Resource Cost Reduction", "Enhanced HP", and more. Paragon Levels are shared across all characters on your account with the exception of the Softcore/Hardcore divide.

Hardcore works similarly with your Shared Stash and Gold; they are still account-wide but will not cross the Softcore/Hardcore barrier.

Now for the best part of Reaper of Souls: ADVENTURE MODE. 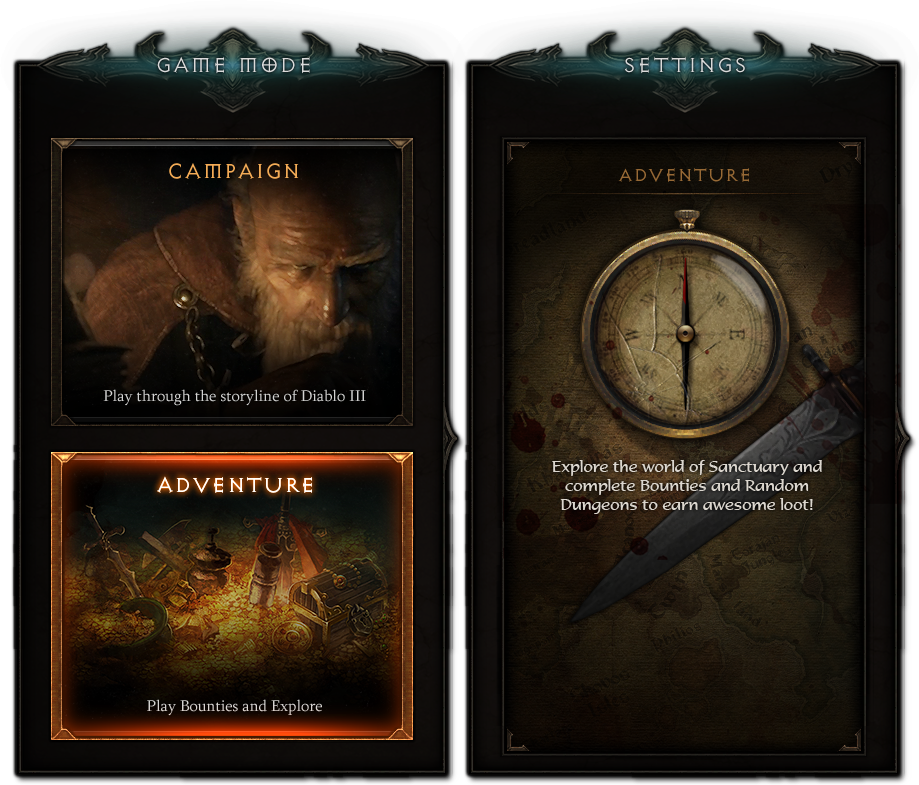 After you finish the main campaign, Adventure Mode Unlocks.

Story-wise taking place after the campaign is over you are now travelling with Tyrael and his new Horadrim Order mopping up the forces of darkness that are still terrorizing all the old zones. You are given specific missions, each mission gives you EXP, Gold, Blood Shards, and a Rift Key Fragment. When you finish all the missions you are given a massive XP/Gold reward and a chest full of random items.

Blood Shards are used to purchase a random quality item - type of your choice from Geed's daughter, yup, it's a new version of Diablo 2's gambling system. 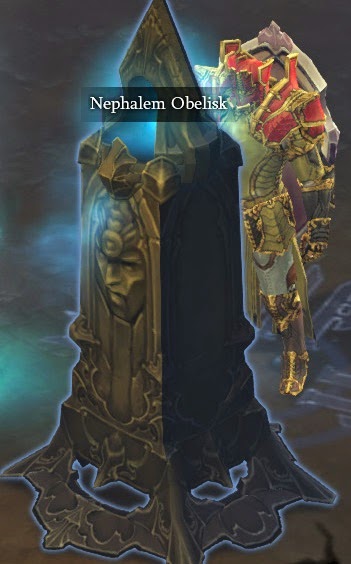 When you collect enough Rift Key Fragments, you can open a Nephalem Rift. (Spelled Nephilim in the Bible.)

Not all Nephalem shared that fate, to sum it up, all the Diablo 1, 2, and 3 heroes were Nephalem descendants; that's how they can level up and destroy demons that would overwhelm an army of normal humans.

So, you click on the Nephalem Obelisk and a rift opens, the rift is a 100% randomly generated dungeon (think Torchlight) where you can be in the High Heavens go down some stairs and be in the Tristram Crypts, then go through a door and end up in the Westmarch streets. All the monsters randomized in a scary cluster fashion, think Diablo 2's final act post-patch when guest monsters from other acts started entering it.

In the rifts you have a goal, to kill enough of the monsters inside of a rift to summon the Rift Guardian, one of several named/and themed bosses with a uniquely deadly assortment of powers. Each Rift Guardian has a much, MUCH higher chance at dropping a legendary quality item than other enemies.

Fun Facts about the new and improved Diablo 3