One of my friends gave me the gift that keeps on giving, Steam Cash, just in time for the Steam Summer Sale too! Among several acquisitions I picked up "Long Live the Queen". The game concept is incredible.

Are you familiar with Japanese VNs? If so skip this paragraph. A Japanese Visual Novel is more or less a text-based adventure where you look at some (crudely drawn in most cases) anime style imagery and read the story as it is told to you. Sound effects and voice acting are entirely optional. In some VNs you will be expected to make choices that affect the outcome slightly, although 90% of the time any choices you make will all lead to the exact same outcome. This is where Long Live the Queen differs!

You choose often, and if you choose poorly, YOU DIE. Hell, even if you choose wisely, things are bound to pop up you didn't expect and... YOU DIE. It's okay, there are achievements for the various deaths. In the classic tradition of games I love so much, when you die you start over.

The story is this: You play as a princess whose mom the Queen has just died. Your father the King Regent, Duke of another land is sticking around to help you for 40 weeks until your education is complete and you are ready to take the throne. Just keep in mind, EVERYONE WANTS YOU DEAD.

Every time a character starts to talk there is a [?] next to their name in the corner of the screen and you can get a biography on them; it turns out the characters are all really fleshed out and the structure of the noble families is equally defined.

Every day you are given the option of one of two skills to learn and your princess' mood will determine what bonuses or penalties she gets to learning it. In addition she will unlock outfits and those outfits will help her do better in the various roles. Your very survival depends on you learning the correct skills for the correct situations, and you'll likely have to die at least once before you learn exactly what you have to do... which is arguably bad game design by today's standards...

Yet, for some reason I never felt it detracted from the experience, I went into it knowing that I'd likely die up front.


Just check out this trailer:

There really isn't much more to be said. My first playthrough I tried to have a woman executed and her power killed me first. Second run I spared her and let her teach me magic, although my cousin was bitten by a viper, she survived just in time for me to have her mother assassinated for disloyalty; of course the brother of the family charged in during a festival and challenged me to a duel, so I burnt him to a crisp with a snap of my finger uttering only, "I refuse". So many things were different in each successive play-through, I even joined the villain and got an evil ending!

There will be a point at which you've experienced everything the game has to offer, but unless you cheat and use guides, it will be well worth the full retail price of $9. 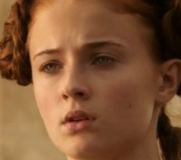 This is of course begs the question, why did I call it a Sansa Stark Simulator? If you've ever read A Song of Ice and Fire or watched Game of Thrones, you've seen her. She's pathetic little princess trapped in a castle and everyone's out to screw her.
That's pretty much your role here.
Learn what you can and do anything you have to in order to survive!
You can win on the sympathy of others using words and music... or you can be a lot less pathetic and win with the skill of your navy or the power of magic!
By Zaric Zhakaron at 6/30/2014