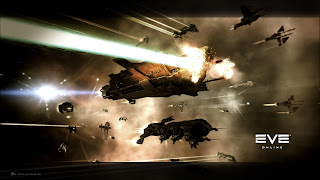 A few days ago one of my friends gave me the Amaar Starter Pack for Eve Online and I have to say the game is insane; the level of depth this universe is beyond verbal description but for all of that it is NOT a friendly game, being a newbie is so punishing you may as well not play without friends.

This game hates newbies, hates them with a passion. The tutorials are boring as hell, the controls are unintuitive, and what you see in space is mostly irrelevant as your primary source of info comes from a window called The Overview that you have to configure the hell out of before it becomes viable, and flying around in your spaceship is extremely hard to control: players who are used to SMOOTH flying mechanics are treated to something akin to controlling a robot with a remote control. The game makes ZERO attempt at explaining this to players in a fun and engaging way.

In short, the game FAILS at helping new players get into it, but that said the game has a lasting power, one that even World of Warcraft couldn't hold onto!

As for me, I've had the sage advice of a real life friend and two online friends; almost none of which we actually interact in game mind you. Although I did receive a gift of 100 Million ISK or in-game money; a few level 3 implants, and other fancy stuff.

Okay, so I'm a noob, I went to the market and bought a ship, and all the equipment to FIT or equip my ship (without FITting your ship, your ship is worthless, no weapons or anything). I buy everything and move on my way. I go do missions for NPCs or kill players to loot their wreckage (you get all the fittings they had equipped). The result of these activities is I get ISK, MONEY...

Little did I know that mining ships mine ore from asteroids or moons, industrialists buy the ore and turn it into processed metal, manufacturers buy the metal and turn it into equipment, ships, and more. What blows the mind is this is all done by player and when an ordinary ever-day player (newbie or not) who aren't into any of those professions, who need ships, equipment, ammo and the like go to the market and want to buy said things, they pay the ISK. EVERYTHING in this universe (with the exception of skill-books) comes from limited resources existing within that universe. It is up to players to DO EVERYTHING.

THE ENTIRE GAME IS AN ECONOMIC SIMULATOR No BS, it's the truth.

It's like second life, except WITH PURPOSE. You see in other games you have clans or guilds, in this you have CORPORATIONS. These become Mega Corporations join into Alliances and alliances into Coalitions. Anyway, the purpose of the game for them is to CONQUER and DOMINATE as many systems as possible. As the corps war over control of space, ships are lost and resources change hands. Even the winners suffer losses and have to spend more ISK in order to recover them.

Eve is a PvP Oriented Game


The game supports NPC ran missions you and your friends can enjoy for money and a special currency called Loyality Points that only exist for the faction you are doing missions for (start running missions for another faction and it's a seperate pool of LP), as well as "Standing" which is reputation. Most of these missions take place in Deadspace pockets, which are accessed with special acceleration gates. These make it harder (but not impossible) for other players to ruin your missions. There are also Incursions, which are scheduled invasions of NPC super fleets, which you and other players can choose to participate in for massive rewards.

You can go out and mine asteroids, return to a station and sell them. Sometimes you put them up for their market value or higher, other times you just look at the list of buyers (people who have placed a buy order) and the instant you put yours up for sale, their buy order takes effect and gives you the money.

All of this can be done in what is called Highsec, High Sec, or High Security Space. The main NPC factions exist in Highsec and the super-advanced Concord Fleet defends it. Here's the rub, you are FREE TO ATTACK ANYONE ANYWHERE, it is an OPEN PK or PLAYER KILLING SYSTEM. Yup yup. I see you, I can kill you.... of course there are consequences! Yes, if you are in High Sec space when you attack someone, you are marked as a criminal and your security rating goes down. That is when Concord comes, a ship will warp in and blow you to pieces. So far no one to my knowledge has been able to go toe to toe with Concord because they use some ultra powerful technology normal folks and governments can't get... but as a result, you are pretty safe in High Sec space.

You can mine, do missions, whatever you want without a MAJOR fear of being killed (not to say people won't find a way to kill you and run away, or more likely kill you and die to Concord) and in general you can make a living being a businessman or miner. There are even corporations that take on "hauling contracts" their entire purpose is to bring a ship with an expanded cargo hold and haul your items/ships/whatever from system to system. All of these can be done without fighting other players.

Of course, that said there are always outlaws. Space Priate NPCs that other players have dubbed RATS (the act of seeking out and killing them is called Ratting); rats will attack you randomly while you are mining or travelling through certain points of interest. Mining ships for the most part do not have any defenses, so instead they carry Drones that will seek out and kill the rats for you before they can break your shields.

Lowsec, Low Sec, or Low Security Space are the areas on the border regions of civilized space. They are monitored but not policed, this means that if you 'gank' or kill someone there without provocation, your kill is recorded and it affects your security status that may cause you problems down the line when you return to High Sec space.

You will find that most new corporations that are seeking to become PvP oriented will live in Low Sec space. They will often pool their resources and build player owned structures or POS there. Of course I always think of Piece of Shit whenever they say POS but whatever. Fleet battles occur reguarly to control low sec space and wars break out.

Once you are in a corporation that is at war, they may fairly engage each-other ANYWHERE including in High Sec space. So being in a corp is dangerous, suddenly High Sec isn't the happy haven it used to be, and soon being in the normally unsafe Low Sec with your allies becomes the best place to be. Protected by your POS energy fields, wandering into Null Sec space to mine, joining up with your fleet to drive other players out of YOUR ALLIANCE'S SYSTEM.

I'm still a noob, my experience there is fleeting; Null Sec, Null Sec, Null Security, 0 or less security systems. What I do know is that it's anything goes. No kills affect your security rating; that said however, if you piss off the mega corporations that own these areas, they can bring the full might of their alliances down upon you and suddenly you are very dead and on a very direct hatelist. That said, all of the real resources in the game are in Null Sec. There are also Wormholes that lead to special areas that you have no idea what to expect.

So yeah, I barely scratched the surface... of course I only had a week to seriously invest in this and then that time was over. I'll try to get a youtube video up about this in the next couple weeks. A couple more things to note though:

Finally, my staple advice for ANY AND ALL MMORPGs, GET FRIENDS TO JOIN YOU. Friends can make or break the fun you have online.
By Zaric Zhakaron at 5/30/2013