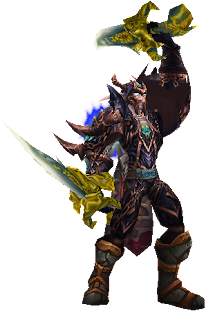 Icecrown Citadel was the final Raid Dungeon at end of Wrath of the Lich King known as Fall of the Lich King. It neatly tied up the story that Warcraft 3 began involving Arthas, the Young Prince, Paladin in training who lost his soul and destroyed his own kingdom. The Fall of the Lich King also had a 3 instance chain that told a stright story and had you escaping the Lich King, who actually came to kill you personally.

Everyone who is everyone in World of Warcraft has done those 5 man dungeons, and there aren't a whole lot of people who haven't done the Icecrown Citadel at this point, however most of the optional achievements escaped me back during Wrath of the Lich King's final chapter: Fall of the Lich King.

I pondered going back during Catacylsm, but really my wife and I quit that. My shining chance came at level 90 and what stood in my way? GUNSHIP BATTLE! Well in a recent patch they FIXED the gunship battle: You can now solo it and that is exactly what I did!

After effortlessly killing the first two bosses I died once before figuring out the details of the Gunship Battle. Here's how to solo it:

For Deathbringer Saurfang I had to0 go into Blood Spec and outheal his damage. After that I went on to solo the the plagueworks with no issues.

The wall I hit however was named Valithria Dreamwalker. A green dragon. While attempting to earn the Portal Jockey achievement I quickly remembered the premise of this fight: YOU HAD TO HEAL THE DRAGON TO FULL, no boss to kill, just an infinite flow of adds to kill until you do it.

This can NOT be solo'd by a Death Knight in any way shape or form as far as I know. If I'm wrong, feel free to comment below and tell me how.

So, it looks like I'm going to have to get myself a group in order to earn Portal Jockey. I imagine the final group makeup will look like this: My Priest, My wife's druid, and 2 other healers. We'll see how this turns out, achievements are account-wide now so it really doesn't matter which character I'm on. My other characters and my wife's sub account all get the credit too.

The Devs seem to be in favor of players soloing old raids, we'll see if they fix this little wall or not... only time will tell.
By Zaric Zhakaron at 5/01/2013