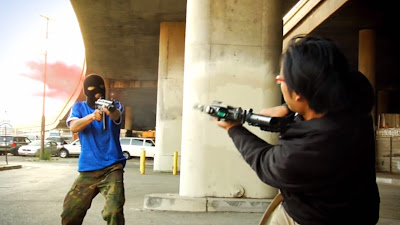 One common trend in online gaming, especially first/third person shooters where twitch aiming is required is Hackusations, aka accusations of hacking. Roughly 90% of all hackusations are false.

Most of them are done by unskilled players whom don't understand concepts like Internet Latency and the occasional third person prospective creating an experience that is not identical across everyone's machines.

What does that mean? Let's put it simple. Say I'm over on the east side of the room and you are shooting at me, you see the bullets hit me, blood splatter, my character is screaming in pain but I don't die. HACKER! CLEARLY!

WRONG. This is an illusion created by client/server player prediction, a system introduced in Quake 1's official improved online client Quakeworld. Pretty much every online game these days uses some form of player prediction and in horrible unoptimized games like APB Reloaded and games like certain Call of Dutys that use P2P Networking to set up matches. You see YOUR GAME CLIENT says that that person is getting their ass shot to hell, where as the server host, whomever that may be is the true athority on what is going on and your communication to that server isn't good enough or the server is glitching.

But that isn't the end of it, wallhacks, aimbot, the list goes on and on. These hacks do in fact exist and people get banned for using them all the time. That said, except in the most extreme examples, when people think these hacks are being used most often it is either a lack of skill on their part, bad luck, or internet lag.


Just the other day I had a "OMG THAT GUY IS A HACKER!" and I go on to sneak up on him, kill him. Get into head on fight and kill him. And win the match. I am not skilled, by no means. That means the guy doing the accusations of hacking, was just horrible. And alas, that example is typical of my experiences online.

If you suspect they are hacking, use whatever game you are playing's tools to report them for doing so. Let the game's admins sort things out, the rest of us don't want to hear your wild claims, true or false. So quit the damn hacksuations!
By Zaric Zhakaron at 4/30/2013