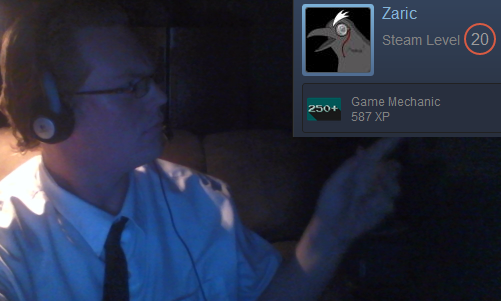 Even though I participated in the Steam Trading card beta (and enjoyed it thoroughly) I didn't really consider collecting cards after the beta ended.


I found Terraria was the easiest to level; cards were only worth $0.10 a piece and there were a whole mess up for trade. So between using a TINY portion of my leftover Christmas Steam Wallet and some well picked trades I was able to max out Terraria, from there a stray card or two traded allowed me to craft many steam badges.

Each badge gives you exp, Terraria has 5 total levels, that means you craft the set 5 times to earn a badge for +100 exp each. After enough exp you level up. The levels give you funny little perks such as +5 maximum Steam Friends; the cap is normally 250, +50 if you link your steam account to your Facebook account.

Other perks I got were two "Featured Sections" on my profile, were I could pick certain things to display such as games owned, achievements collected, or other information. I decided to show off my blog for the top one, and on the bottom one I showcased the rare achievements; the rare achievement option automatically displays the rarest ones and keeps them up to date.

Finally, there is the concept of Booster Packs. When you earn all the card drops allowed to you for playing a certain game, you then have a chance to earn a booster pack. The chance to get the booster packs is increased by 20% for every 10 Steam Levels you achieve. So, being level 20 that increases it to 40%

Leaving out the Icons, Backgrounds, and Cupons I earned, in the end, what point is there to having all these badges and levels, NONE! It's kind of like the gamerscore for Xbox Live, one hundred percent worthless; yet fun.
By Zaric Zhakaron at 1/08/2014