This page will be updated with information about the new run when my job stops murdering me.

BELOW IS ARCHIEVED INFO ABOUT THE OLD RUN. I've Replaced it since then.

ES2:Daggerfall is the second game in the Elder Scrolls series, made most popular by Oblivion and Skyrim. The game features over 30 Kingdoms, each roughly the size of one of the Morrowind, Oblivion, or Skyrim games. 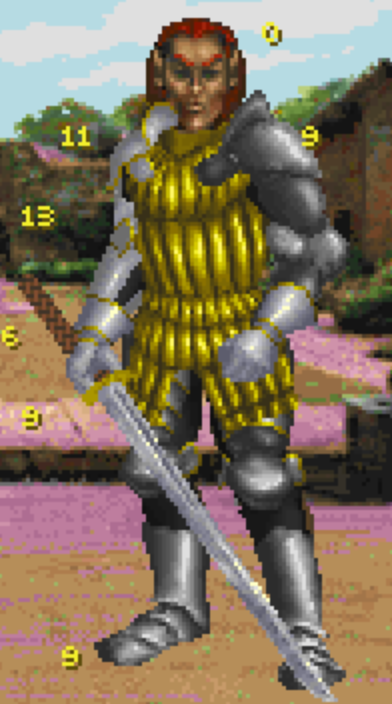 Critical Weakness: Paralyze (Overridden by Racial but awards bonus points none the less)
Forbidden Armor: Leather and Orcish (weakest and not the best kind of rare)
Forbidden Weaponry: Blunt and Hand to Hand (Focus on Long-Blade, will never use)
Forbidden Shield: Tower (too heavy, will never use)

Major Skills:
Archery (When the enemy is far away I can attack without spending magicka)
Stealth (Lets me sneak by enemies or even backstab them)
Mercantile (Buying lower, selling higher. Goes up with everyday vending of junk)

Minor Skills:
Doding (Chance when hit to not be hit)
Swimming (So I won't die in underwater dungeons)
Alteration (Physical and Magic resist buffs, sleep and paralyze)
Illusion (Invisibility later on.)
Mysticism (Allows me to Set a Bind Point and Recall there, getting back home!)
Thaumaturgy (Contains the Levitate spell I'll need later)

DOWN HERE I'M GOING TO LINK VIDEO HIGHLIGHTS FROM MY GAME!!! FOR NOW THIS INCOMPLETE LIST WILL GIVE YOU A BASIC UNDERSTANDING OF THEN --> NOW. 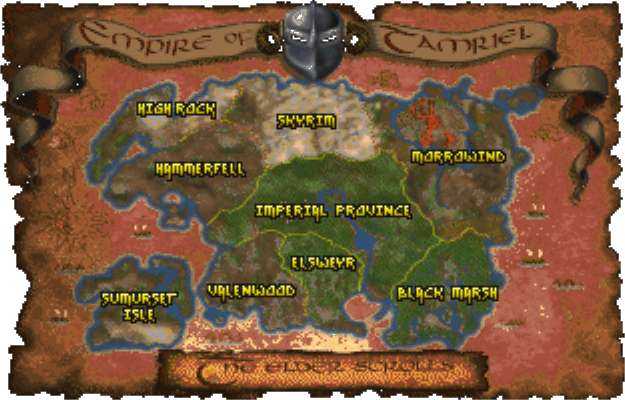 I made my character a High Elf knowing I can exploit their immunity to paralyze... have you ever been paralyzed? It fucking sucks. You die unable to do anything. Good Game. But the High Elves that never happens!

What's more is with Daggerfall's awesome character creation system, you can create a custom class, then give yourself Critical Vulnerability to it, this'll earn you lots of skill points to spend on advantages. The High Elf immunity overrides the critical vulnerability for gameplay purposes.

What did I advantage myself into?

Immunity to Poison and Disease of course!

*Try to fast travel with most diseases and YOU DIE, you are unfit for travel, end of story.
*Poisons will tick your health away and you'll die even if you try to rest heal them up.
*In short they are both horrible to have. Now, it does make sure you can NEVER BECOME A VAMPIRE OR WEREWOLF, both are options in this game... both are BAD. Yes, as a vampire you'll get gain +20 all stats, +30 to a lot of skills, several spells even if you didn't learn them before, and be immune to paralyze, diserase, poison, iron, and steel weapons... but guess what? There are no stages. Here's the deal, you must feed every 24 hours or you can NOT REST/Wait until you do. Oh, and best of all, If you are out during the day the sun BURNS YOU TO DEATH, no other conditions on that by the way, just SUN = DEATH. Oh, and if you go to holy ground it'll will slowly drain your health to death. None of that shit for me, thanks.

After answering some simple questions to figure out that I have a neutral relationship to Merchants, Nobles, and Peasents it dumps me into the game. 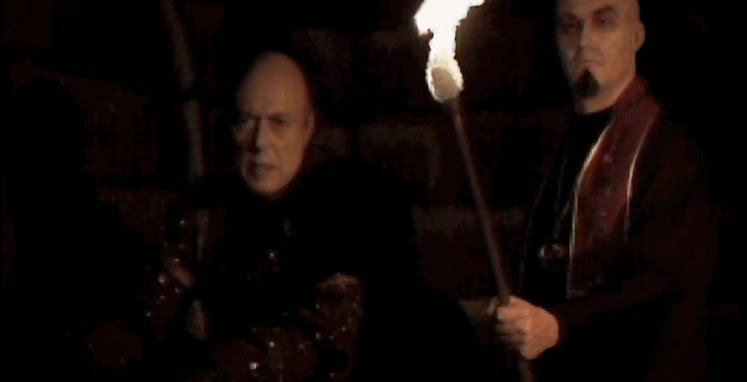 "Forgive the gloom, but I'm not Patrick Stewart in this one, you'll have to wait for Oblivion." Emperror Uriel Septim the 7th.

Okay, so Uriel Septim the 7th was an unworthy heir to the empire and he let it splinter and crack, there was a lot of in-fighting and the once solid provinces broke up into tons and tons of Kingdoms and started to go to war.

He was basically okay with that provided they all stayed loyal to the empire as a whole. But then the King of a tiny little kingdom called Daggerfall died honorably in battle, rose from the dead, and conjured up a legion of undead spirits. So, he wants you to go and put the King's spirit to rest. Oh and he sent a naughty letter to the Queen of Daggerfall but that never arrived... OOOPS who has that now? If you find it you have to destory it... but that's a side quest and will only get his gratitude. 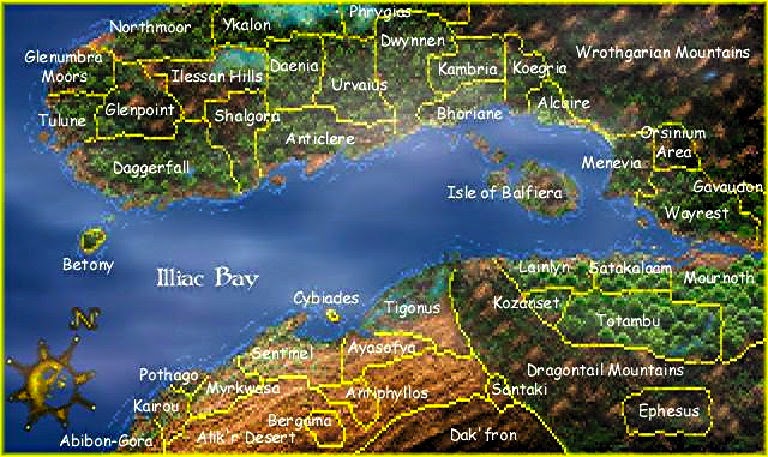 So, you set sail for Daggerfall in the Iliac bay a tiny area between High Rock and Hammerfel... but guess what? That TINY area just happens to be devided into over 30 Kingdoms each with the play-space of a Morrowind, Oblivion, or Skyrim province.

Shipwrecked, mudslide sealed me into a dungeon.  Blah BLah Blah Lady Brisienna in a tavern room blah blah blah three major powers in the Iliac Bay are Daggerfall, Wayrest, and Sentinel. I should talk to the Royal Famlies of each Kingdom... NAH! Instead lets join the Fighter's Guild!

Chapter 2 - The Fighter's Guildhall has a Tiger Infestation

The Fighter's Guild had a quest for me.

Guildmaster: One of the local homes has been infested a wild animal and you have to kill it.

Guildmaster: Okay, the animal is in the Fighter's Guild! Go and kill it.

Me: Wait. Isn't that where we are right now?

Guildmaster: What kind of animal was it again?

Unknown voice: It's a Tiger.

Chapter 3 - Knights of the Dragon are Anti-Orc Nazis

Go to a castle/fortress, kill the orc Warchief, collect the loot. According to the knighthood, all Orcs must die.