Shadow of Mordor Review - Or should I say, SHINING FINGER!

This hand of mine glows with an awesome power, its burning grip tells me to defeat you!
Take this! My Love, My Anger, and all of my Sorrow!
SHINING FINGER! 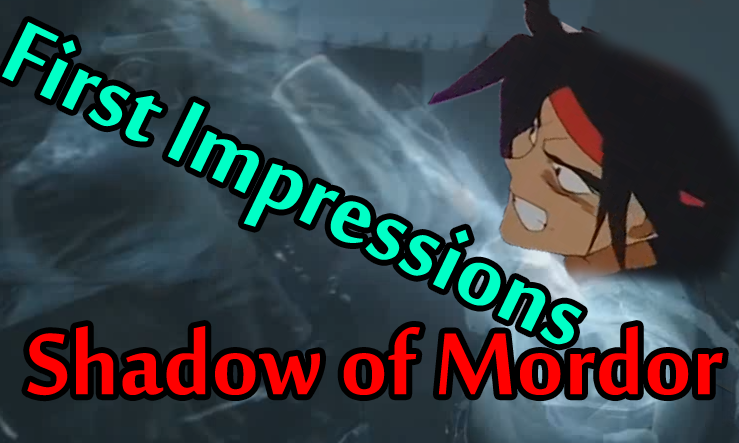 That, was my first impression of Shadow of Mordor. I mean, don't get me wrong, when you look passed that to the fantasy-styled Arkham City with a nemesis system built in, it's pretty fancy, but that's about it, but fancy only gets you so far. Fancy is like a really good tasting dessert, yes, you love it when you've had it but eventually it's too sweet too long and you are going to want some meat and potatos. This is what Shadow of Mordor is lacking.
You can watch the first hour of my game here

Enter Talion; something happened between his wife and a nobleman, I suspect he was going to rape her or something, that was a pretty common thing back in medieval times, anyway Talion murdered the guy and again was common in typical medieval politics his life was forfeit

So he had to go live on the wall with his wife, protecting the Black Gate in the name of Gondor. If you've seen Game of Thrones, you know about the Night's Watch, same concept. Well, Mordor attacks and kills everyone, a new villain known as The Black Hand (created for this game so you have someone to beat that won't invalidate Lord of the Rings). sacrifices your life to summon the spirit of the Elf Lord who forged the first 3 rings -- the elf ones of Fire Wind and Water. 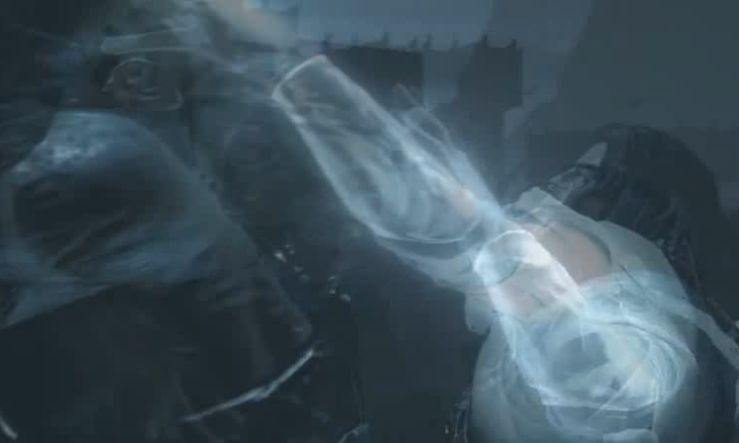 Talion will bounce around the battlefield dodging strikes and parrying blows, occasionally putting a Batman Arkham City style smack-down on enemies, except with a sword-dagger combo instead of fists. The Elf Lord will handle Bow attacks and give you bullet time so you can have time to aim on the horrible controller -- I'll get to that part later.

Someday I'll make an effort to play Record of the Lodoss War for the Dreamcast again and upload that to YouTube, it's a Diablo clone. The parallel however is that in the series took place on Lodoss, and Marmo was the small, barren area where the evil nation was. The Dreamcast Lodoss game was open world taking place entirly in Marmo. So too does Shadow of Mordor take all of middle earth and instead restrict you to Mordor, which is not a bad thing... actually, go figure the most compelling part of the game is the open world Mordor. Everything that isn't a captured human or a rebel camp wants you DEAD -- but the way you go about bringing Mordor's downfall is entirely up to you.

There is of course a mandatory story-driven main quest that you can at any time entirely ignore in favor of wandering around Mordor to kill Captains, Level Up, Unlock Powerups, do side missions, and more. In this sense it's almost identical to Arkham City. In fact, there are so many things that are the same that I'll just go ahead and list the differences instead:

Instead of just having the Random Thugs serve no purpose, they have a chain of command, and the Captains will tell the grunts what to do. If you are in or close to a fortress, the Captains will actually tell one of the grunts to go light the Signal Fire... yeahhhh you have about 20 seconds to shoot the running orc in the head before every orc in the fortress and orcs from srrounding areas start to come after you, that includes Captains from other areas.

I haven't really defined a Captain so lets do that now, where you kill thousands of nameless orcs on your quest, every once in a while you'll try to perform a killing blow only to have it blocked in an epic WTF moment where the game cutscenes long enough for the Orc's name to flash on the screen and it to say something clever based on it's personality... personality, yes. Each Captain has a procedrually generated set of personality traits, strengths, and weaknesses. Some of those weaknesses can allow them to die in one hit to things you would NEVER EVEN THINK OF USING. But I digress, the Captains are typically bad-asses amongst an army of puny weaklings.

If you've ever played Dynasty Warriors, it would be like doing a mission that had nothing about Lu Bu in the objectives, then suddenly Lu Bu rides in and kicks your ass. In a similar fashion, you'll be fighting some orcs and accidently get low on health, well, one of the Captains was watching and waiting for that, now it's AMBUSH TIME. That's based on his personality trait. Other captains may choose not to finish you off if they think you are unworthy, others have things they are afraid of, or get enraged over.

Most importantly they REMEMBER. Did I mention YOU ARE BANISHED FROM DEATH? Yeah, you can't actually die. If you die, you respawn at one of the main spirit towers around Mordor.. this is a normal function of games, and they tend to gloss over it in said games. NOT Shadow of Mordor, they make it a main story plot point. YOU ARE BANISHED FROM DEATH. If a Captain kills you, that Captain gets a promotion, levels up, and just plain gets more badass.

Now, lets say you died or failed to kill a Captain in the past. When you encouter him again, he'll have something to say about your previous encounter, something to the effect of "You should have finished me off when you had the chance." or if you died, a remark of shock akin to "But -- I killed you!" and if you die again, "Come back as many times as you like, I'll just keep killing you." They'll keep getting promoted and powered up.

Now, if you die to a random Orc, they'll collect a bounty on your head, level up to Named Status, have a duel with one of the existing Captains, die to or kill the Captain and if successful, take their place. If you killed a bunch of captains and you died to a random orc, well, congrats, there was an empty space that was just filled.

Captains, Veteran Captains, Elite Captains, and the elusive Warchiefs, and beyond them the Talons of the Black Hand, and the Black Hand Himself, with MILLIONS of nameless orcs ready to fill in some gaps when they appear.

I'm not even going to bother going more deeply into the system, it's perfect for the open world concept and it is what makes Shadow of Mordor great.


Story
Parasitic in nature, if you threw out everything you knew about Lord of the Rings and Tolken's work and judged this game based on it's own marrets... it's well, weak and pathetic!

This game is a one trick pony and that's the awesomely fun, endless Nemesis System. When you try to look beyond it to a meaningful narrative, you will not find one. Being BANISHED FROM DEATH is a freaking awesome way to make the Nemesis System work, because it wouldn't otherwise. However, in taking away death, you take away the fear of it, it's now an inconvenience. I don't fear death, I just can't be bothered to die right now because that would make things a little bit more annoying.

As I mentioned earlier, the villain was inserted into Lord of the Rings to make sure that you had a target but killing that target would not invalidate Lord of the Rings. Parasitic worm, trying to wriggle it's way into the existing body without being noticed and expelled for being NON CANNON, which it is, fanboys will always find a way to insert things into cannon that do not belong but if J. R. R. Tolkien didn't write it, it doesn't exist. If they want to create their own little Lord of the Rings sub-universe for this series, they should do so, but fanboys who try to say this is cannon need a boot to the head.

Using Star Wars as a model for inserted sides-games, lets put it like this, it never descends into the horrible story-abyss that is The Force Unleashed, but it never rises up to the lofty heights of the Old Republic

Character development is and always will be the primary factor I use to judge a story and it isn't there for Shadow of Mordor, the characters do not "grow" personality wise, Things are "revealed" about them later on, but revealing is not the same as developing.

Audio
Music is good not great; I had it on, I ended up turning it off. The ability to turn it off means I don't hold it against the game.

Controls
This game just plays right with a controller, from the moment to the analog stick, all of is smooth and makes for fluid combat...

Well, except for the archery. Aiming with that thing is a hell on earth, the fine twitch movements required for exact aiming just can't be done in the speed that the mouse can. What does that mean? Well not a whole lot, the game will automatically enter BULLET TIME the instant you go to shoot something so you won't feel that bad, unless you are used to FPS games with the mouse at which point you are thinking to yourself: In the time it took me to aim and line up one orc, I could have killed all 4. and it's true.

But that's okay, unlike 90% of games Shadow of Mordor does not punish you for switching back and forth between Controller and Mouse in the same session. A lot of people still can't wrap their head around the fact that there are some things a controller is better for and there are some things a mouse is better for. First Person games will always be ruled by the mouse (until a new tech comes out like VR or Thought Control) and Third Person Games and/or Platformers will typically be best with controllers -- there are of course exceptions to every rule and every game plays it's own way.

FINAL
Sneak Kills, Grabbing Orcs and mind-raping them with wraith powers to learn about your enemies names, locations, and weaknesses, the list goes on and on. If you have the urge to power through the story, then go find another game this one isn't worth it -- if on the other hand you want an expansive world to explore with nearly endless side objectives, collectables, and fun for triple digit hours, this is the game for you.

The fun will not last forever, eventually you'll clear everytthing and it'll be done, done, done -- just like Arkham City. But when you compare the $50 full retail pricetag to the number of hours of fun you can get, it is worth it.

I recommend buying it on Steam