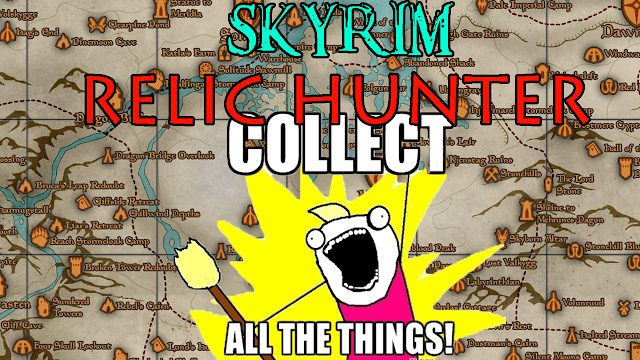 The Relic hunter is more or less my completionist tendancies given form by combining it with the essence of my previous main characters, Mortis and Mordekai. This time however he will not be a vampire at any step of the way, but rather a Lich as an ultimate goal.

This run will be done using REQUIEM: THE ROLEPLAYING OVERHAUL, which is a counter-intuitive name because the mechanics are so strict it actually forces you to play certain ways or suffer. That said, it plays like a CLASSIC RPG, which is unto itself freaking awesome. Repeat: Requiem is NOT like other Overhauls.

Step 1 - Read the Requiem Manual (PDF). It's done in the same classic form as Elder Scrolls 1 and 2's manuals were.
Step 2 - Watch my Modlist Tutorial Video for this run:


ESSENTIAL MODS
If you Don't install these you may as well be playing on the XBox or PS4
because you'll be getting all the bugs they have.


STRONGLY RECOMMENDED MOD
This will greatly enhance your overall experience.
Interface and Utility Mods
Going in order from Most Essential To Least Essential
Overhauls & Game-changers
These mods work together to change the entire game experience.


Not actually using these for a "survival experience" but rather to make food, water, and sleep useful. I've toned down the settings to make all of them still required, but not a life or death deal. It adds a lot to the atmosphere and play itself, taking it a little ways from the "action adventure" that Skyrim is.
Magic & Powers Mods
These are a MUST for a magic-centric character, be it pure mage, spellblade, or battlemage. Listed in order from most to least essential.
Items, Collections Completions
The reason this character exists.
Graphics, Sound, & World Feeling Mods
Changing the game's experience in differnt ways, mostly providing a darker more brooding atmosphere.
Roleplaying Mods
These mods give live to otherwise broken mechanics, return things from Oblivion into the game, and add new features that offer you the power of choice!
Populating Skyrim
The popuation of Skyrim was always "off", not enough people doing certain things, too many people doing other things. These mods work togather to greatly enhance the general experience of simply walking around a city, or exploring new, previously empty areas.
NEW ADVENTURES, Quests, & Dungeons
MANY of these sync up with the Legacy of the Dragonborn, but others are simply worth playing because they take you to new areas, to explore new environments, and interact with new characters.

Step 5 - Bashed Patch, see above video.
Step 6 - Requifactor Patch, see above video.
Step 7 - Mod Configuration Menes - Once in-game, wait for all the mods to load. Once they are loaded, hit Escape, and go into the Mod Configuration Menues and tweak, Tweak, TWEAK the crap out of it until it's the way you like it. There are a TON of mods that make sweeping changes to the game, but many of them can be customized. I left almost nothing on the defaults -- create the experience you want.

Final Step:
Game Unstable?
Is it crashing constantly while traveling?
Are you ONLY using the mods I listed here but it just keeps crashing?