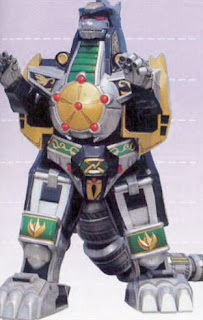 Everyone has at some point heard of at least one of these shows, the truth of the matter is these series are nothing like how the average person thinks they are.

The Super Sentai trend started in 1975 with Himitsu Sentai Gorenger. FIFTEEN shows later, Kyōryū Sentai Zyuranger would be brought over to the United States as Mighty Morphin Power Rangers. The action scenes for the first season of power rangers were simply remixed, american dubbed versions while they included non-fighting scenes. Later iterations would actually have original action, but for the beginning it was a simple audio re-dub and graphical remix of Japanese footage.

The picture on the side is that of the Guardian Beast Dragon Caesar as shown in Zyuranger. And he's not the 'green ranger' he's the Dragon-Ranger. Apparently american kids were too dumb for that so they stuck to colors.

As many different Power Rangers series as people think there are, triple that and that is the number of Super Sentai series out there.

The level of violence that was cut out of this show is staggering, concepts too that were dumbed down for kids. Prince Lotor discovers the truth about his mother and kills the witch Hagar. Oh, and Hagar's voice actor for the japanese version was none other than GOKU from Dragonball Z.

Funny stuff really. Of course nothing is quite as a funny as the Sven character... His name isn't Sven, it's Shirogane and he is KILLED by Hagar, no he doesn't go to see a doctor.

Mach Go Go Go, known to many a former cartoon watching person as Speed Racer. The main character "Speed" is actually named Go, which can also mean 5. "Mom" and "Pops" actually had proper names, as did Trixie and Sparkie were named Michi and Sabu. 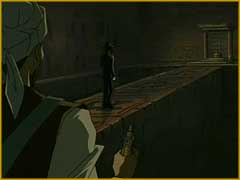 This show is just legendary with the amount of minor 'localization' edits they make to the show, such as removing EVERY SIGN, Japanese, English, or otherwise. Being killed replaced by sent to the Shadow Realm, and more. 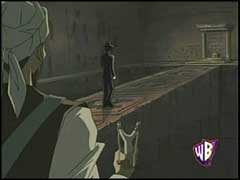 The one, ONE thing though that I can't stand is the gun replaced by a slingshot. Yes, Yugi' father is held up in the American version.... BY A SLINGSHOT!

I was a fan of Dragon Ball growing up... not Z, not GT, not Kai... Regular old Dragon Ball. That's back when the series was an ADVENTURE show instead of a STAND IN PLACE LOOKING CONSTIPATED show.

Dragon Ball was based off a Chinese story called Journey to the West that centered around a monkey boy... Dragon Ball introduced you to that monkey boy as Goku, who is separated from is everyday life to journey the world looking for Dragon Balls with the promise of making his WISH COME TRUE.

They didn't really ruin anything with the japanese to english conversion on Dragon Ball... just some pointless perversion such as talk about Bulma's panties. Still, no one remembers Dragon Ball, everyone remembers the crap fest it tuned into... yes, I'm talking about you Z.
By Zaric Zhakaron at 7/22/2013